QB- Dennis Dixon- Dixon is still the best dual-threat QB in the nation. The Ducks are fresh off a win against USC and now face another top 10 team in Arizona State. Dixon may just pull himself into the Heisman lead if he can attack the Sun Devils on the ground and through the air. I really hope he does.

QB- Colt McCoy- After coming off another week where Colt hit the ground more times than he hit receivers, he finally gets to face a team that gives up tons of passing yards. Hopefully Colt can stay off the turf and exploit the very poor Poke pass defense. McCoy has also gained some big yards on the ground.

RB- Darren McFadden- Could he be the Heisman favorite? McFadden is rushing for 125 yards a game and has scored 11 TDs. McFadden is going to see the ball quite a bit as he is Arkansas' work horse. Darren should help the Hogs beat the Cocks this weekend.

RB- PJ Hill- Even though Hill is going against Ohio State's tough defense, he is going to get his yards. Hill is averaging almost 120 yards a game and has been the best thing the Badgers have had on offense all year. Wisconsin may not win, but PJ will pack on some stats. 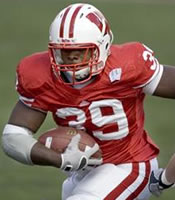 WR- Adarius Bowman- Possibly the most physically imposing receiver in the nation. Luckily for OK St, Bowman has proven to be the best receiver in the Big 12. Bowman is averaging over 100 yards a game and looks to exploit a young Texas secondary who let Nebraska pass for over 300 yards last week.

WR- Quan Cosby- Quan has to be one of the most underrated receivers in the Big 12 and maybe the nation. He is a quality possession guy, with incredible hands, who can also make the big play. Oklahoma State is horrendous in pass defense and Quan is Colt's go-to-guy. Should be a big day.

O- Oregon- The Ducks face a decent Arizona State defense, but Heisman candidate Dixon and the Ducks will be at home, where they beat USC last week, and look win a typical, high-scoring Pac-10 matchup.

D- Virginia Tech- The Hokies are 2nd in the ACC in total defense, and faces a Wake Forest offense that has been somewhat inconstant this year. Va Tech proved they could handle a great offense by literally shutting down Heisman candidate Matt Ryan and the Boston College offense for all but the last 2 minutes of their game last week.