Texas Tech head coach, and amateur conspiracy theorist, Mike Leach set out in his post-game press conference to disprove several misconceived notions plaguing the American public. One being that Texas is better than Tech in football. The other being that man has, indeed, never walked on the moon. In his relatively short tenure will the Red Raiders, Leach has already taken it upon himself to debunk several longstanding American conspiracies.

Who can forget his post game press conference after Tech's 2002 victory over Texas A&M when Leach presented his own evidence to prove the existence of a grassy knoll gunman, which he dubbed the "Zebbie Film." 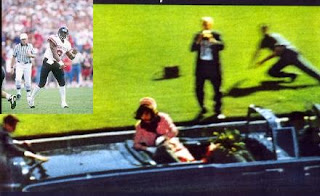 "I mean, once I was was able to isolate the frames from the amateur video I shot, I was able to see Zebbie clearly poised for an attack from the famous knoll," Leach explained. "Honestly, It was the best recruiting video i have had in a while. I mean my offense is predicated on a guy who is pin-point accurate and can hit a receiver crossing the field. I mean Kennedy's motorcade was nothing more than a drag route from our slot receiver."

With such groundbreaking revelations under his belt, Leach confidently turned to the two topics that have been plaguing him for years. He started off his Saturday night presser, turning to the topic of just how Texas was able to beat Texas Tech 59- 43. In response to a question from a reporter, Leach exclaimed,"What do you mean we should have just not given up 59 points on defense and we might have had a shot at winning! It is CLEAR that we would have won, but for the residence of one of the referees on the crew."

quarter points, Leach quickly reverted back to his fall back pirate persona which he seems to use to field all questions dealing with his porous defenses. "Aaaar, Maties! The plank ye shall walk if ye thinks me defense is not as salty as as a lily-livered land lubber after a fortnight on the Caspian Sea!" Mutters of "Oh sweet Lord, here he goes again" could heard from several of the reporters in the room, as they were forced to dawn their eye-patches, since Leach insisted on only fielding questions from those "true to the pirate's creed."

Leach decided to wrap up his press conference with a lecture on how unlikely it was that the USA ever sent a man to walk on the moon. Always fond of charts and Ven-diagrams, Leach presented no less than 45 exhibits proving that Neil Armstrong walking on the moon was nothing more than the abominable snow man wearing a space suit stolen from the aliens at Area 51. " I don't know why you people can't just see that Big foot was able to shoot this film with borrowed equipment from the CIA in a storage room in the White House where Kennedy kept Marylin Monroe? I just don't know how to draw this up any clearer," a frustrated Leach implored. "I mean, if I can establish an offense that consistently puts up 40-50 points a game and still have never had a quality season, you'd think you would just take my word for all of this."

Next week, Texas Tech faces their next challenge as they face the Oklahoma Sooners, while Mike Leach faces his next challenge of proving that the Loch Ness Monster is nothing more than Elvis in a fish suit.
Posted by Royal With Cheese at 11:59 AM
Labels: Fake News, Mike Leach, Pirates, Zapruder Film