Marcus Griffin, came to Texas in 2003 with his twin brother Michael, from Bowie High School in Austin, Texas. While Marcus was not as highly touted as his brother Michael, Texas fans quickly came to find out that they were cut from the same cloth, as hard hitting, head hunting safeties.

After redshirting in 2003, he first appeared as a backup on defense and a special teams player. He recorded 10 tackles in 2004, 7 of which were on special teams, highlighting his nose for the ball. In his sophomore campaign, Griffin got more involved in the defensive rotation appearing in all 13 games at free safety, recording 32 tackles on the season. 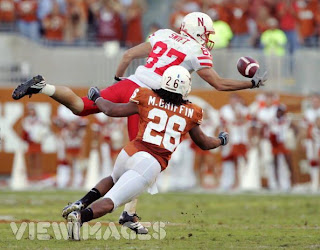 2006 Marcus moved into the starting lineup alongside his brother Michael. While Michael garnered national recognition, eventually being drafted by the Tennessee Titans in the first round, it was easy to see that Marcus had a bright future as well. He recorded 90 tackles, with 4 pass deflections, 2 forced fumbles, a sack and an interception. He was part of an extremely talented secondary that resulted in three of his teammates getting drafted in 2006.

With the entire secondary moving on, Marcus was the undisputed leader of the secondary. He has not disappointed this season, a preseason All-Big XII Second Team Selection, Griffin is leading the team in tackles (74) and interceptions (3), one of which he returned for a touchdown. Marcus has been the best player on the field this season, and plays just like his brother.

It will not be long until Marcus will be joining his brother on the field on Sundays. He has great instincts and a passion for playing the game. He has been a fan favorite and one of the few reliable and consistent players this year on defense. He will certainly be missed, and Texas fans will miss having a Griffin patrolling the secondary for the first time in 5 years.
Posted by Petrucelli's Kid at 10:47 AM
Labels: Marcus Griffin, Senior Day