The 2007 season came to an unceremonious end for the Lady Longhorns soccer team as they were eliminated from the NCAA Tournament at the hands of the Florida State Seminoles, 4-0, on Sunday. A season that was full of accomplishment for the Horns ended rather quietly in the third round of the NCAAs. With an early season win over UCLA, to a second consecutive Big XII Tournament Title, and two victories over top five Texas A&M in the span of six days, the second coming in round two of the NCAA tournament in College Station, this season has been all about accomplishment for the Longhorns. 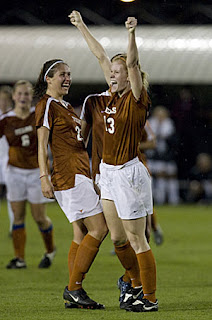 But they didn't come ready to play in round three and got outplayed by a very good team. They were never really in the game, as they were out shot 29-5, and while they were only down 1-0 at half, Florida State had controlled the entire time. The second goal pretty much sealed the deal a minute and a half into the second half. This was the Longhorns third appearance in the third round of the NCAA tournament, and ended the same way as the last two, with a loss.

The Longhorns ended the season 16-4-5, and spent most of the season ranked in the Top 15. The Longhorns will lose three starters to graduation and one reserve. Forward Kelsey Carpenter will be sorely missed as she has been a force for the Longhorns since her freshman season. Scoring 39 goals and 20 assists during her four seasons on the Forty Acres, she was a second team All-American in 2006, and a participant with the US U-21 National Team this past summer. Carpenter has been a constant star for the Longhorn attack and she will be extremely difficult to replace.

Midfielder Caitlyn Kennedy is one of the most talented players to ever step foot on the Forty Acres, but she never achieved her full potential as she was plagued by injuries her junior and senior seasons. When she was on the field she was a scoring threat as well as a creative spark plug for the offense, registering 16 goals and 13 assists over her four seasons as a starter. Her best season was her sophomore campaign, and hopes were high her junior and senior seasons as she was Preseason All-Big XII selections both years. Unfortunately, she could never stay healthy, and her mark on the Longhorns was never what it could have been.

Defender and Midfielder Greta Carter came to the Longhorns in 2006 as a Junior transfer from SMU. In her two years she appeared in 49 games, starting at defense and midfield. This year she played an important role as the Longhorns relied on her constantly to step up her game after injuries to Caitlyn Kennedy and Stephanie Logterman. She responded, having a solid season, scoring a goal and registering two assists. Her flexibility and ability to play multiple positions will be missed.

Leslie Imber spent her four years with the Longhorns as a quality role player who played forward, midfield, and defense. She was always able to step in at multiple positions and log quality minutes. She appeared in 74 games for the Longhorns over 4 seasons and scored 2 goals her junior season. With the amount of talent Texas brings in every year, she could never lock down a starting role, but her ability to play multiple positions made her a valuable commodity off the bench.

With much of the team returning for 2008, and another top recruiting class coming in, the Longhorns will once again be ranked among the top teams in the nation. The Longhorns will be lead by on of the top players in the country in Kasey Moore, who will lead the team from the central midfield and will be a front runner for National Player of the Year. The entire defense will be back led by U-21 National Team member, junior, Stephanie Logterman, junior goalkeeper Dianna Pfenniger, junior defender and three year starter Jill Gilbeau, and freshman Erica Campanelli who emerged this year as a freshman. The offense will be lead by freshman sensation Nikki Arlett, who scored 10 goals and recorded 5 assists this season. She will be joined by freshman Emily Anderson and Alisha Ortiz who both flashed great talent in their inaugural campaigns. The real question marks for this Texas team is who will step up and fill the holes left in the midfield by the graduating seniors. Texas will need bench players like freshman Kirsten Birkenhold and Stephanie Gibson to step up and fill the void.

Texas had a great season, but going out the way they did has to leave a bitter taste in the mouth of a program that looked poised to make a run towards their first Final Four appearance. While it was disappointing finish, the Longhorns cleared many hurdles and built confidence for what should be a promising 2008 campaign.
Posted by Petrucelli's Kid at 10:44 PM
Labels: 2008 Women's Soccer, NCAA Tournament, Women's Soccer