Frank Okam came to Texas, out of Dallas Lake Highlands HS, as a big-time 5 star recruit. Frank was a big guy,

but his expectations as a Longhorn were even bigger. Fortunately for Texas fans everywhere, Okam has lived up to the hype, and more. He has been a mainstay in the middle of the defensive line, starting as a true freshman.

Okam was a Freshman All-American, playing in all 12 games and starting one. He posted 22 tackles, 6 for a loss, nine QB pressures, a fumble recovery and 2 sacks. Okam had Texas fans excited about him continuing the tradition of Texas pumping out NFL defensive tackles.

Frank only missed one start during his sophomore and junior year. In those two years, he recorded almost 80 tackles and was a general menace in the middle of the line. Okam became a household name and every offensive coordinator was well aware of his ability to clog up the middle of a line of scrimmage. Okam was a consistent enforcer.

Okam relieved many Texas fans when he decided to by pass the 2006 NFL Draft (even though some thought he had a shot at being selected in the 1st round) to return for his senior years at Texas. Okam has not disappointed as senior. He has been in on 41 tackles through 10 games and has 4.5 sacks. Against Oklahoma State Okam was in the backfield on a regular basis, disupting the Cowboy second half. 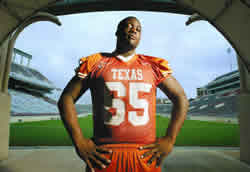 Okam will join Shaun Rogers and Casey Hampton as big-time NFL defensive tackles. Okam is a 1st round talent and will be a high draft pick in 2007. Frank Okam has lived up to his hype and Texas was lucky to have him for all four years.
Posted by Royal With Cheese at 11:36 AM
Labels: Frank Okam, Senior Day