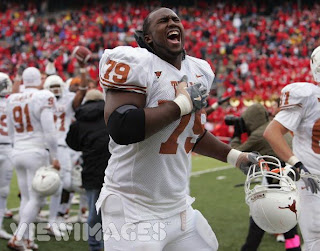 Hills broke into the starting lineup in 2006 as a junior and became a mainstay along the offensive line. After starting all 13 games in 2006, he was voted an All-Big XII Honorable Mention, an accomplishment, given the 3 NFL caliber players already on the line. This season he found himself on the Outland Trophy watch list to start the season, and has started every game this year, helping as one of the few experienced players on a young line.

Hills has been known at Texas for his imposing presence and athleticism along the line. However, he is even more well known for the passion that he plays the game with. Hills can be recognized as the player that is always waving his arms, trying to pump up the crowd, celebrating big plays with teammates, and always giving his all. He is an entertaining player to watch, which is a lot to say for an offensive lineman, and will certainly find himself playing on Sundays next year. He has ingrained himself as another of the successful linemen to come out of Texas in recent years.
Posted by Petrucelli's Kid at 8:30 AM
Labels: Senior Day, Tony Hills