This is Exactly How You Want to Run an Athletic Program

Mitch Mustain is gone. He was outdone by a more complete Dick, and has moved on to a program known as much for its excellence as it is for the mental stability of those involved with and surrounding the program. While he most likely will not throw a pass for USC in the next 3 years, he will certainly not be involved in any soap operas. 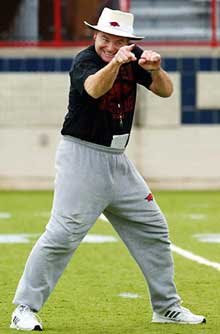 While one might think that Mustain's departure has finally put to rest the drama surrounding the Razorbacks over the past few weeks, you would be wrong. After fans obtained Coach Nutt's cell phone records, fans, blogs, and media questioned Houston's knowledge of emails sent by boosters to Mitch Mustain encouraging his transfer, as well as Nutt's involvement with a female television reporter. This led to a letter defending her husband by Nutt's wife, which is important. I think it's a very positive sign to have your wife in your corner defending you against your critics when you've been cheating on her. Unfortunately, her letter did nothing to silence the critics, which led to Houston Nutt's open letter.

Sadly, this to has done nothing, as today, an Arkansas fan has brought a law suit against the University President and Chancellor saying they knew about the circumstances around Mustain's email and their inability to launch a fair and independent investigation into the situation. I think this could be the first time that a fan is actually bringing a lawsuit against his team.

When this situation began with the cell phone records, many wondered if this was a dangerous new trend that could develop at other universities around the country. However, after the complete debacle that this situation has become, it is pretty clear, that Arkansas is a unique program. By unique, I mean that they are completely out of control and insane. The fans are out of control calling for Houston's head, and the administration is staying out of it, when they probably need to be getting involved one way or the other, boosters are too involved, and Houston Nutt along with his wife is clearly insane.

One must wonder what would have happened had Arkansas not gone to the SEC Championship game and had instead gone 5-6. But instead, while most programs enjoy increased fan support and prosperity through success, Arkansas will continue their example of how not to run an athletic program.
Posted by Petrucelli's Kid at 8:36 PM
Labels: Arkansas, Houston Nutt