Take off your party hats and hold that last verse of Auld Lang Syne, Houstonians. This is the not the honor you may think it is. has received this dubious award for fielding the worst team offenses in the three combined major sports franchises: Rockets, Astros and Texans. The offenses of the Astros and Texans have been brutal to watch the past few years but, in the true spirit of civic pride, the Rockets have joined this fraternity of futility (the anti-Phi Slamma Jamma) thus far in the 2007 NBA Playoffs.

The saga of the Houston Texans has been well documented (and quite lamented). Right form the start, through the expansion draft, the Texans chose lineman Tony Boselli to be the first player in franchises’ history. I would give you his stats, but Mr. Boselli never played a single game for the Texans due to injury. Sweet. So how did the Texans manage to top this? By drafting David Carr as the first pick in their very first draft. Sigh… At least with Boselli, he didn’t cost you any games. The same cannot be said for Carr. In 2006, the Texans finished 28th in total offense. But hey, that is actually an improvement from a 30th place offensive finish in 2005. At least they had a 19th place finish in 2004 to get them over that 31st place showing in 2003. If nothing else, the Texans can say they were the penultimate offense in 2003. That at least makes it sound like they were good, right?

Would it be wrong of me to wish for the days when Jeff Bagwell’s jersey was a little less… cough, cough…“baggy?” (Not that I am implying anything). The Astros offense was not that great in 2006. They were ranked 25th in runs scored, 30th in batting average and total bases (Penultimate!!!). Not to mention the painful chore of watching Brad Ausmus and Adam Everett ground into double play after inning ending double play all season.

So you may ask: what does giving Carlos Lee $100 million do for your team offense? Answer: 20th in runs scored and 26th in team batting average! Hooray! Oh, and I am going to point out that the team directly behind the Astros in team batting average is the Pittsburgh Pirates. Yes, this is the same Pirates team that the Astros are currently 0-6 against this year, and who have made the pitchers Jonah Bayliss, Zach Duke, Paul Maholm, and Ian Snell look like the second comings of Sandy Koufax. In the six games played against the Pirates this year, the Astros have put up 14 runs. And in the last 2 game have left a staggering 31 men on base. Just to put it in perspective, Craig Biggio may be the best batter on this team right now. I am just gonna let you sit back and let that one soak in for a while.

Not to be outdone by their fellow Houstonians, the Rockets have decided to throw their hats into this prestigious ring (probably going to miss). Thus far, in their opening round playoff series against the Jazz, the Rockets have apparently given up on the idea of “field goal percentage” as an important goal. In Game 1, the Rockets blistered their way to 39% shooting from the floor. They followed that up with an impressive 36% performance in Game 2 (and 16% from 3-pt land). Then the Rockets stood up and proclaimed, “No! Indeed, we can shoot worse!” And they did in Game 3, going 32.8% in the game. Will the Rockets try to go all series without shooting over 40%? I don’t know for sure, but I bet they give it their damnedest.

But fear not Rockets fans, the team did set a few records in the midst of Game 3’s futility. The Rockets had a total of 4 players score on Thursday. FOUR! I could count that high on one hand, even if a freakin’ bear had bitten my thumb off! Team playoff record lows were set for points in a game (67), fewest field goals (21) and fewest points in a half (25). Again, to put this in perspective, just hit 15 shots in Game 3 of the Lakers/Suns Series.

I leave you with one lasting image that really sums up this whole situation, I give you this photo… Words just cannot describe… My brain hurts. 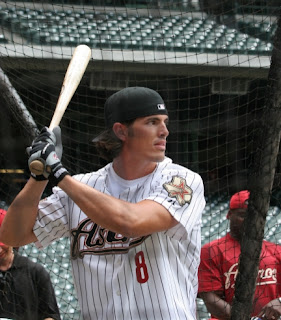 As a Celtics fan, I remember the days of Jim O'Brien fondly. Play solid defense, and everybody but the center gets the green light to shoot the three ball. Antoine broke the record for 3's attempted that season and Paul Pierce wasn't behind. Got them to the Conference Finals where they were finally felled by the Nets. So do not expect to see the end of offensive indignity. But when the three pointers start dropping, even at a modest rate, it isn't a half bad approach to the game.

Man I'm glad somebody else finally noticed this--it's been driving me crazy for years! I'm surprised you didn't include the fact that the MLS defending champion Houston Dynamo have managed ONE goal in THREE games so far this season--looks like the gestation period for this disease is one year eh?

Before you blast the Texans for taking Boselli in the expansion draft, try looking up WHY they took Boselli: JAX told the Texans that if they took Boselli, his bum shoulder, and his giant contract, they would leave Gary Walker and Seth Payne unprotected as well.

This isn't hearsay, this is documented fact. So was taking Boselli as a throw-in on Payne and Walker worth it? Yeah, probably.