The NFL Draft is this weekend, where the future hopes and dreams of young men will be determined. The draft has become a giant event, thanks to the marketing machine that is the NFL. There already is around the clock coverage with projections, analysis, and of course, upside. While Chris Berman will let you know what will happen seconds before it actually does, we figure we should get you ready for what you will see. So you're prepared for, well, for the upside.

Coming into his senior year, Tarell Brown was supposed to be the superstar shutdown corner for Texas. After his arrest on marijuana possession and gun charges, Brown was suspended for the Ohio State game. After his suspension was lifted he faced a series of nagging injuries and with the emergence of Aaron Ross, he never became the player he was supposed to be. 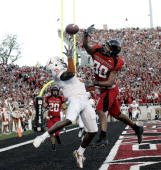 His senior year and off field issues have definitely hurt Tarell Brown's draft status. But considering he is widely considered a first round talent, Brown could be a major steal for a team. At 5'11" and 192 lbs, Brown has a good size and frame. With a 4.45 forty, Brown has great speed and has shown quickness and excellent ball skills through all his workouts. He is a tough, physical player, a solid tackler and could emerge as a good special teams player. His workouts has raised his draft status, but his weak senior year, off field issues, and some durability questions has kept him from being a 1st or 2nd rounder.

Brown is listed as the #20th best cornerback by www.nfldraftcountdown.com, and should fall in the 3rd or 4th round. If he can stay out of trouble and avoid injuries, Brown could get a shot to contribute on special teams and in Nickel packages. He has the ability that he very well could end up being a steal in the 4th round.
Posted by Petrucelli's Kid at 11:21 AM
Labels: 2007 NFL Draft, Football, Tarell Brown