Trying to Save the Season With No Hits

From the beginning of the season the Longhorns looked a little bit off. While they were ranked in the top 25 nationally and had a solid record, the Horns were playing inconsistent, uninspired baseball and didn't look promising going into conference play. The lackluster play finally turned into a full blown disaster as the Longhorns have been 11-11 since March 28th and have a un-Longhorn-esqe 10-11 conference record.

What was the absolute low point? Probably losing to UT-Arlington and UT-San Antonio during that 22-game stretch has to be near the top. A 3-6 record at home during conference play has been a point of embarrassment, but the worst moment probably goes to that 31-12 drumming at the hands of Missouri. (Yes, that's a baseball score.)

What has been the problem? Well the hitting hasn't been spectacular, but a .284/24/128 isn't far off 2007's .302 average during conference play. The defense has certainly been underwhelming, with 24 errors in 21 games. But one would definitely need to look at the pitching to find the source of the Longhorn's problems. A 6.34 team ERA in conference play is absolutely atrocious, especially compared to last year's 3.19 mark in conference play.

The biggest problem has been the Longhorns inability to find starting pitching. Though the entire staff hasn't exactly been anything other than a big problem. The ace of the staff, Austin Wood has been 1-1 with a 7.26 ERA in conference play, while Riley Boening (7.13) and Kenn Kasparek (6.16) haven't faired much better against the Big XII. Augie Garrido has been trying everything as Cole Green, Chance Ruffin, and Brandon Workman (7.01) have gotten chances to start as well. Green (2.81) and Ruffin (2.93) have been working out of the pen mostly, but the two freshman might have to be what carries this team down the stretch. 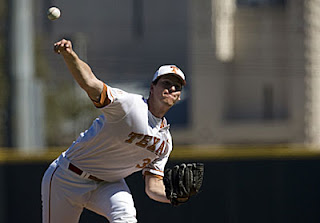 The Longhorns might be trying to turn the corner, as Kenn Kasparek threw a complete game no-hitter against Texas State yesterday, but the Longhorns will need to greatly improve as a staff if they hope to turn this season around. Texas has 7 games left and will need to show well to even hope for an at large birth into the NCAA Tournament. The way this season has been going, the safest bet looks to be that that Longhorns will be at home this post season. Which might not be a bad thing, as bad of a disaster as this season has been. But, there is still a hope if the Longhorns can sweep the Baylor (26-20) series and take that momentum into their three game season finale against #6 Texas A&M (38-7). Taking two out of three from the Aggies would put the Horns in good shape with a (33-19)(16-12) mark, and riding great momentum.

But, that is highly optimistic. It might be better off to hope that the Aggies don't drop 31 runs on us, and let this season ride off slowly into the sunset and out of our collective memory
Posted by Petrucelli's Kid at 5:18 PM
Labels: 2008 Baseball Season, Augie Garrido, Austin Wood, Baylor, Brandon Workman, Chance Ruffin, Cole Green, Kenn Kasparek, Texas A-M