Mocking Down the Second Round

With the draft only a day away, I couldnt help but to continue in my mockery and go for the second round. So here are picks 32-63 with my personal "I'm better than Mel Kiper" guarantee....

If you haven't seen my first round mock, you may want to start there first to get the gist of how far we've come. Check it out at: http://drinkingtheforty.blogspot.com/2008/04/my-final-mock-draftmaybe.html


32. Miami – Dan Connor, Penn State LB – This could easily be a QB like Chad Henne, but I think they can wait for him. With Zach Thomas in Dallas, the Fins need LB help.

33. St. Louis – Mario Manningham, Michigan WR – I could also see an OT like Sam Baker, but they lost Issac Bruce and Torry Holt is getting restless too.

34. Atlanta – Sam Baker, USC OT – They got a franchise QB in the first round, now they need to protect him. Could also be a DT like Trevor Laws. 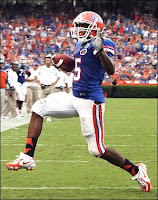 36. New York Jets – Andre Caldwell, Florida WR – The Jets can continue to bolster the offense with a big speedy receiver like Caldwell or Early Doucet. Could also be a secondary pick.

37. Atlanta – Trevor Laws, Notre Dame DT – Works out well for the Falcons since they missed out on Dorsey at #3.

38. Baltimore – Phillip Merling, Clemson DE – Merling is a steal in the second round and I think that Baltimore can wait till day 2 to grab a QB like Andre Woodson.

39. San Francisco – Lawrence Jackson, USC DE – I don’t think Jackson will ever last this long, but a pure pass rusher will help the Niners. Need an outside linebacker or offensive lineman, but Jackson is the best available here.

40. New Orleans – Pat Sims, Auburn DT – If the Saints miss out on moving up in the first round to snag a DT, they’ll still need one sooner or later. Sims is a run stuffer that could pan out in the NFL.

41. Buffalo – Jordy Nelson, Kansas St WR – It was too early to take a WR at #11, and maybe they’ll move down for Lito Sheppard. If not they still need a WR. Nelson is a big speedy receiver who has climbed the charts, but they may go with someone more athletic like Doucet or Earl Bennett.

42. Denver – Reggie Smith, Oklahoma S – Defensive tackle is also a concern, but I just don’t like the second tier group of tackles. John Lynch is getting older and Smith could be a young athletic spark on defense.

43. Carolina – Tyrell Johnson, Arkansas St S – Offensive tackle is supposedly a concern, but I think the resigning of Jordan Gross is heavily underrated. An upgrade at safety is a better move here.

44. Chicago – Joe Flacco, Delaware QB – Rex Grossman’s days are numbered in the Chicago. I think Flacco gets the nod here over Henne due to his arm strength that will favor him in the Windy City.

45. Detroit – Curtis Lofton, Oklahoma LB – The Lions got some offensive help in the first round and now need help in the heart of their defense. Lofton is an improvement at middle linebacker.

46. Cincinnati – Early Doucet, LSU WR - If the Bengals get Ellis in the first round, they’ll turn to either WR or OLB here. With the WR depth, I’m saying they take a big receiver like Doucet for some Ocho Cinco insurance.

47. Minnesota – Carl Nicks, Nebraska S With the acquisition of Jared Allen, the big concerns turn to the offensive line and secondary. I think the Vikings take the best available in Nicks. They’d be in big trouble if Bryant McKinnie goes down.

48. Atlanta – Patrick Lee, Auburn CB - Atlanta could have an entirely different team by the end of the second round, but I think they may trade on or two these picks. If not, they can look for someone to replace DeAngelo Hall.

49. Philadelphia – Duane Brown, Virginia Tech OT – The Eagles need some line help, made evident by their dismal performance against New York. Brown is still a very good OT in a deep class. 50. Arizona – Jamaal Charles, Texas RB - After skipping on a running back in round one, the Cards need some insurance on ol Edgerrin James. Jamaal Charles is a crazy fast compliment to James.

51. Washington – Donnie Avery, Houston WR – If the Redskins can’t make a deal for Chad Johnson, then receiver is still a need here. Donnie Avery is an underrated quick receiver from Houston who will surprise some folks.

52. Tampa Bay – Marcus Harrison, Arkansas DT – The Bucs addressed receiver and now they could use some depth or even replacements on the defensive line. Harrison could make a good compliment to Chris Hovan.

53. Pittsburgh – Earl Bennett, Vanderbilt WR - I never like the first two picks for a team to both be offensive linemen, so I think that the Steelers go with a young guy at WR to appease Big Ben who loved to throw to Plaxico in his irreplaceable rookie season.

54. Tennessee – Quentin Groves, Auburn DE – Tennessee needs some help on defense and Groves is a steal if he falls this far.

55. Seattle – Fred Davis, USC TE – The Hawks used their first round pick to replace Shaun Alexander and now they need a big tight end to assist the vertical game. Davis has fallen with pre-draft workouts, but his potential is so high, it’s a safe pick.

56. Green Bay – Josh Barrett, Arizona St S – This is a position that Green Bay could definitely use some help with. Depth in the secondary is a serious problem for the Packers.

57. Miami – Chad Henne, Michigan QB – Miami finally gets their quarterback late in the second round and it may surprisingly be well worth the wait.

58. Jacksonville – DaJuan Morgan, North Carolina St S – The Jags grabbed a great free safety in Reggie Nelson last year and now need a strong safety to play alongside him. Morgan may be one of the best safeties in this class.

59. Indianapolis – Ray Rice, Rutgers RB – The NFL is moving more toward a two back system and Addai could use a compliment back. Rice is a speedy small back who could take some pressure off of Addai.

60. Green Bay – Oniel Cousins, UTEP OT – The Packers could use some line depth to protect first year starter Aaron Rodgers. Cousins is a lot like Ryan Clady in size and technique.

61. Dallas – Terrence Wheatley, Colorado CB - If the Boys are confident that the league will reinstate Pacman then they will use their two first rounders elsewhere. Here they’ll try to grab some insurance in a second-tier corner. Could also be used for some offensive line help.

62. New England – Xavier Adibi, Virginia Tech LB – The Patriots are aging quickly and could use some depth at linebacker. Adibi could learn from some of the leagues best.

63. New York Giants – Martellus Bennett, Texas A&M TE – I’m a conspiracy theorist who believes that Jeremy Shockey will be traded. If that happens, New York should be looking for another big dependable target for Eli Manning.
Eat your heart out McShay.....
Posted by Barnes & Nobis at 2:40 PM
Labels: Mock Draft, NFL, Second Round