With Indiana facing certain sanctions from the NCAA for the next several years, the Hooisers were still able to land Tom Crean. Roy Williams left the Kansas Jayhawks for North Carolina in 2003. Kansas was able to replace him with Bill Self, from Illinois, who just recently turned down Oklahoma State to stay at Kansas.

It makes you wonder, what are the Top 10 coaching jobs in college basketball? We here at Drinking the Forty consulted with some of the finest basketball experts in the country to find out. Hey, if ESPN can pull random people off the street and call them experts, then we can too.

Here is our Top 10, based on a program’s national persona, recent success, fan base, facilities, history and tradition, and potential for future success.

One of the crown jewels of college basketball, just ask any basketball person over 50 about the program and look out for the ensuing drool. Since Bob Knight was forced to go, the Indiana program has been in limbo. From the Mike Davis years to the giant black eye named Kelvin Sampson (that’s what you get for hiring a Sooner), the Indiana program has faced some rough times as of late. 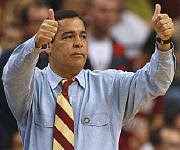 But one thing that shows that this program is still among the tops in the sport is the way it has remained in the news and relevant despite its struggles. With major NCAA sanctions looming, (granted they won’t be as bad as Baylor, I guess that’s a perk of being a major player in your sport) the Hooisers were still able to land a major hire in Tom Crean of Marquette. The ability to go in and say, “Hey, you’ll probably have 0 returning starters, face several years of probation, and be expected to win immediately, but did we say we’re Indiana?” and get the coach to sign the dotted line, speaks volumes about the tradition, history, and relevance of this program.

While the .624 winning percentage over the last seven years is not where Indiana would like it, they have had a few seasons in contention in the Big Ten, including the improbable Mike Davis trip to the Final Four. But, what makes Indiana is the tradition and history. It’s the candy stripe pants, Assembly Hall, five national championships, and eight final fours. Whether they win or lose, they still will be Indiana, one of the most storied programs in basketball.

Indiana had been fighting their hardest to become relevant again, and took the shortcut named Kelvin Sampson to do it. Despite the NCAA sanctions, the relevance was achieved. Sampson was able to land a major recruit in Eric Gordon, and while he will be heading to the NBA, Indiana showed it is still capable of attracting the best players. Tom Crean’s success in Marquette will allow him to recruit anywhere in the Midwest, and coupled with the Indiana name, he should be able to become the leader in the region, which is important in keeping Chicago talent close to home.

While it may take two or three years to fully get the program back on track, Crean was the perfect hire to bring Indiana back to elite status in college basketball. It has been 21 years since the Hooisers cut down the nets, but with Tom Crean at the helm, the possibility isn’t that far off. And that is why the Indiana Hooisers come in at number six on our list.