To the surprise of not many, DJ Augustin declared for the NBA draft today. While he has not hired an agent, it was done more on the precaution of injury, not for the possibility of choosing to return. While Augustin did not come as a surprise, it was the declaration of AJ Abrams that caused some concern for fans on the Forty Acres. 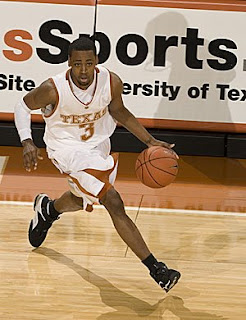 Abrams, too, did not hire an agent, and is a much safer bet to return to school for his senior season. Even Abrams admitted that he is using his free pass during his junior season, to test the process, and see where he ranks. While Abrams is a great shooter, his size and lack of all around game will hurt his draft status. It would be quite surprising if Abrams is not back in a Longhorn uniform for his senior season. However, it is not a forgone conclusion. Only a few short years ago, most thought that LaMarcus Aldridge would be drafted, and Daniel Gibson would return for his junior season, only to surprise everyone with his agreement with the Cleveland Cavaliers. But, I will also say that Daniel Gibson was bigger and a more well rounded player than AJ Abrams at that point in time.

If Abrams does not return for his senior season it would be a huge blow to the Longhorns. Abrams will be relied on to be a perimeter scorer for the Longhorns, as well as someone who is expected to share ballhandling duties with Justin Mason and Dogus Balbay. Abrams early departure would cause all kinds of problems for the Longhorn backcourt and press Balbay and J'Covan Brown into larger roles than they currently would be expected to fill. 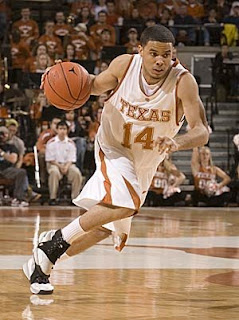 While I don't think that Augustin is completely ready for the NBA, I can't fault the decision to turn pro. Most think we will be a lottery pick, and many pundits have him falling at #11 to the Indiana Pacers. The Pacers would be a good fit, as it is an organization in transition, and if Augustin shows to a capable point guard, he will certainly get his chance to replace the off-court headache that is Jamaal Tinsley. The only drawback to going to Indiana for Augustin would certainly be the players around him. They certainly are in transition and are missing a few pieces. Danny Granger and Mike Dunleavey are the most quality pieces they have, with Troy Murphy and Jeff Foster as solid compliments. Jermaine O'Neal has been a disaster for the past three seasons and Jamaal Tinsley isn't far behind him. Augustin would probably get his opportunity to play and has a chance to become a successful pro, if he does stay in the draft. That's a lot of money, and a solid opportunity to grow in the Eastern Conference. That's why you can't fault DJ for leaving early and turning pro.

The two most intriguing questions to follow from here on out is whether AJ Abrams stays in the draft and what the Longhorns will do with DJ Augustin's scholarship. With the extra scholarship and a large opening at point guard and points, the Longhorns will be a player on the recruiting trail to fill the void with the pieces that are still available in the 2008 class. At the top of Barnes' wish list certainly has to be Devin Ebanks from Connecticut. At 6'8" and 185 pounds, he is a long, athletic, swingman that would fit nicely at Texas. He could play two or three, and ranks #11 on Rivals.com Top 150 list. Texas is competing with Memphis, Rutgers, and West Virginia for the small forward's services. If the Longhorns could land him it would be a huge sign for Barnes and give him another valuable offensive weapon for 2009. If Ebanks does decide to go elsewhere, the Longhorns would definitely turn their attention to Wesley Witherspoon, another 6'8", 185 pound point forward out of Georgia. Witherspoon, #34 on Rivals.com's list, is choosing between Colorado, Memphis, Virginia, and the Longhorns. Another player that may come into play with the open scholarship is SF Jeff Taylor (6'7"/197), out of New Mexico, who was interested in Texas before recently giving a soft verbal to Vanderbilt. If Texas can bring in one of these players, it will cushion the blow of losing Augustin and allow Texas to remain a player in 2009.

But if Texas loses AJ Abrams as well, it will cripple the Longhorns' title hopes in 2009. DJ Augustin was a great Longhorn and will be sorely missed, but it is the right time for him to move on. We'll have more later this week on his legacy at the Forty Acres. But here's to hoping AJ Abrams makes the right decision and comes back to lead the Texas Longhorns in 2009.
Posted by Petrucelli's Kid at 6:02 PM
Labels: 2008 NBA Draft, AJ Abrams, Devin Ebanks, DJ Augustin, Dogus Balbay, Indiana Pacers, Jeff Taylor, Justin Mason, Men's Basketball, Rick Barnes, Wesley Witherspoon