Cowboys package picks to acquire WR Roy Williams from Detroit.
The Cowboys are in need of a young talented receiver to play opposite of the aging Terrell 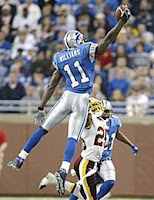 Owens and Terry Glenn. Patrick Clayton is a nice compliment to the system but is in no way the future of Dallas’ passing game. Williams, an Odessa native, has made it clear that he is unhappy in Detroit and would love to try his hand with another franchise. Where better than the great state of Texas where he is adored? After acquiring CB Pacman Jones yesterday, their round one priorities are at WR and RB. Packaging their two first round picks for Williams makes more sense to me than taking a chance on a mediocre receiver class. Williams is and was a much better prospect than even Devin Thomas at his best. Why take a chance on a young guy, when you could grab a guaranteed All-Pro and look for a speedy back in the second round to compliment MB3. Roy Williams plus a Ray Rice or Jamaal Charles trumps a James Hardy and a Felix Jones any day at the poker table.

The Buffalo Bills secondary has never been the same since losing Nate Clements to free agency last year. Partner that with the injuries and disappointments in the Bills secondary depth behind Terrance McGee and it’s obvious that the Bills need another CB. They could take a chance on one of the talented draft prospects at pick #11, OR they could get an established playmaker in Sheppard and wait for a much-needed receiver in the second round. I think the Eagles would be glad to get an extra pick in the draft to grab a pass rusher and a WR and would benefit most from cutting ties with an unhappy, dominant personality. I mean it did work well for both parties when they cut ties with T.O.

Cincy finally wises up and sends WR Chad Johnson to the Redskins.
I still cannot fathom why the Bengals did not pull the trigger on this trade earlier this 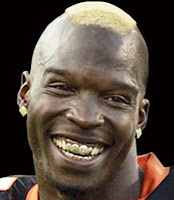 week. Does Marvin Lewis and Cincy’s front office really think they are going to benefit from “testing” Chad? If he says he isn’t going to play, I would not tempt Chad Johnson. For all you know, he could come in, sabotage a couple of games and still collect his paycheck. Ocho Cinco is crazy. Word is that the Redskins are making Johnson their number one priority for draft day and are reworking a deal that will give you even more benefits. Take the deal, part ways with Johnson, and be glad that you got rid of an on and off the field distraction. You still have T.J. and like previously stated, it worked so well for the Eagles. Don’t shoot yourself in the foot.

DE Jason Taylor dances his way onto one of the 1996 expansion teams.
The Dolphins are seriously attempting to get rid of the veteran as of Wednesday and I 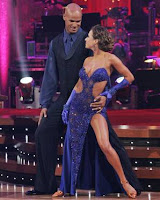 can’t understand why if they were going to make this move, they didn’t consider Chris Long or Vernon Ghoulston further? That being said, I’d love to see the Dolphin’s poster boy and Dancing with the Stars celeb in a different uniform. The team that is reportedly most interested is the Jacksonville Jaguars, but I could also see the Carolina Panthers make a move after the retirement of Mike Rucker. I again think that this move would be best for both parties. Taylor isn’t happy and seems to be becoming too Hollywood in Miami (I mean DWTS in your off-season, no wonder the Fins were 1-15). Get rid of him for a decently high draft pick and go after a second round talent in a deep DL draft like a Tommy Blake or Lawrence Jackson.

New Orleans makes a move up for a DT and then trades picks for TE Jeremy Shockey.
This may be the most far fetched hope for Saturday, but I do believe that the Saints are

trying to move up as high as they can to grab one of the two dominant DT’s. Shockey has become obsolete in New York (they basically won SB without him) and really isn’t happy in NY anyway. Sending him to New Orleans would be a gift to Drew Brees. Brees excelled heavily when he played with the dominant Antonio Gates in San Diego and giving him an extra target makes all the sense for a NewO offense that sputter much of last season. Even if you walk away from this draft with one DT, Jeremy Shockey, and a 7th round CB, that’s a damn good draft if you ask me.

I would LOVE to wake up on Saturday and see all of these NFL draft pipe dreams come true and I think the Randy Moss acquisition last year gave us reason to believe that they all can, but if I take a step our of my Mel Kiper led fantasy world and back into reality I would say that we’ll be lucky to see more than one of these trades. I love to watch PTI on Thursdays and see them play percent odds on every topic in sports; being Thursday I’ll give it a go with these trade predictions.

Roy Williams to Dallas? Unfortunately only about 10%. Lito Sheppard to Buffalo? Slightly higher chance at 32%. Ocho Cinco to Washington? The pun-master in me wants to go 85%, but the Bengals are being stingy and stupid so I’m going to go 51%. I think all the money will get him there though, so thus the one percent over fifty percent. Jason Taylor moving? This is my virtual guarantee. 82% chance he’ll move to Jacksonville, Carolina, or the wildcard Redskins. Finally New O getting both a top tier DT and Jeremy Shockey? 0%. But I think they will get one of them, so I am going 60% Shockey/40% DT.