Where Do the Rockets Go from Here?

Sometimes it isn’t fun being right. I did pick the Houston Rockets to beat the Utah Jazz in 6 games, but I have to admit that was a homer call, not my gut feeling. Before the series I expressed my concern that the Rockets would not be able to guard Deron Williams or Carlos Boozer. Sometimes it isn’t fun being right. But what was not necessarily expected was the fall out after the Rockets loss in Game 7.

No I am not talking about Tracy McGrady’s best impression of Andrei Kirilenko during the post-game press conference. I am talking about the unexpected departure of Coach Jeff Van Gundy. I hope everyone in realizes what a blow this is to the Rocket’s cause. Van Gundy is a heck of a coach. Just look at what he was able to accomplish this year with so many things stacked against him. First, Yao Ming goes down for over 35 games with a broken leg. Not only do they lose the best center in the NBA, but they have to replace him with the combination of Dikembe Mutombo, Juwan Howard and Chuck Hayes. Two of them seem like they have been in the league for a combined 50 years and the other is an undrafted free agent that has already been cut twice by the Rockets in his young career.

Van Gundy was working all season with essentially no good options at point guard. He had one who couldn’t penetrate or play defense, in Rafer Alston. And the backup Luther Head only possessed a three-point shot that disappeared in the playoffs. Luther was not a legitimate back up point guard. He couldn’t dribble, pass or defend. So Alston was forced to log more minutes than any Rockets player this season.

Simply put, the Rockets had too many veteran players and were too slow to keep up with the Jazz and the pace of the playoffs. Who did Van Gundy have as options to put on Boozer? Juwan and are too slow and Chuck Hayes is just not a great post defender. Rafer and Luther had no chance against Deron Williams. And when the rest of your line up consists of Shane Battier and McGrady, it just doesn’t stack up to the likes of Boozer, Kirilenko, Gordon Giricek, Matt Harpring, Williams, Paul Millsap, Derek Fisher and Mehmet Okur. Those guys are just so much younger, faster and crisper, there was just no way the Rockets could keep counting on them missing shots all series. Eventually the shots fell and so did .

Van Gundy has not been without some criticism. Many felt his pick and roll offense has always bee too slow and predictable. His teams have never been break away and scoring teams and in the age of Steve Nash, the Phoenix Suns, Baron Davis and fast, scoring teams with strong point guard play seems to be the current style of play. When you have lumbering players and stagnant offense, you just can’t keep up.

But it seems like the situation was a product of the tension between Van Gundy and team president Les Alexander. Apparently Alexander laid most of the blame for last year’s 31 win season on Van Gundy. Despite the fact that the Rockets were decimated with injuries to and McGrady all year, Van Gundy took the heat. This didn’t seem to sit to well with the coach. So when the Rockets had healthy players and the team was doing well this year, Van Gundy turned down two invitations by Alexander to renegotiate a new contract. Apparently his feelings were hurt, and probably rightly so. And Alexander is not blind. He has been watching the success of today’s speed teams and wants one for himself. That is probably not going to happen with Van Gundy at the helm.

In my opinion this will be a huge loss for the Rockets (depending on the replacement). But, despite his old-school style, Van Gundy is a great coach. He got every single thing out of his Rockets teams that he could. Alexander did not give him all the pieces to succeed, but its not like Alexander is going to fire himself, so Van Gundy is the fall guy for the disappointing finish to the year.

Hopefully the Rockets do no think this is the final solution to their problems. There needs to be wholesale changes to next years team. Alston needs a back up or needs to be a back up at point guard. There needs to be a more consistent 2 guard that can run and play defense and a power forward that can combine the shooting of Juwan Howard and the hustle of Chuck Hayes. will get better, but will he be able to integrate into a speed offense? This is where a back up center would be nice. will be . He will fall in love with his jump shot and forget that taking it to the hoop works every time. But he is a great player and I am convinced that if he is surrounded by a better cast, he can lead the Rockets well past the first round.

has some catching up to do with the league and they better do it fast because they will be doing it without a great coach. I am going to miss the depressing and comical Van Gundy press conferences. But few other coaches would have had the success Van Gundy did with the teams he has coached. Alexander better pull a great coach out of his hat. Because he is sure not going to find that will fight for his players like Jeff Van Gundy. 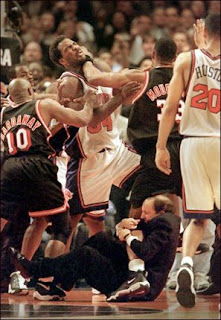